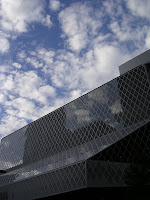 In 1998 the Seattle voters helped pass a bond measure Libraries for All, 196.4 million dollars to renovate 22 existing, and build 5 new branch libraries, as well as to design and build the new Central Library.
Rem Koolhaas co-founder of the Office for Metropolitan Architecture and former Seattleite and then OMA partner Joshua Prince-Ramus were principal designers of the award-winning Central Library building, along with Seattle-based LMN Architects.

On Saturday September 13 the conclusion of the successful 10-year building period will be celebrated in all Seattle Public Libraries.

Rem Koolhaas was scheduled to speak at 2 p.m. in the Microsoft Auditorium, but his presentation has been cancelled.
Here's some old and more recent footage where you can see and hear him speak.

Joshua Prince-Ramus former OMA principle, and since 2006 president and co-founder (with Erez Ella) of REX will present the key note of day-long celebratory presentation in the Microsoft Auditorium (4th Avenue/ 1st floor entrance) at the Seattle Central Library, downtown.

Can't make it?
Read Joshua Prince-Ramus manisfesto or listen to him speak on TED

The presentation is co-sponsored by AIA Seattle.
Admission is free and open to the public.
The Central Library is located at 1000 Fourth Avenue.
For more information, call (206) 386-4636.

The Seattle Public Library Foundation and Friends of The Seattle Public Library ( co-sponsored by USbank) are issuing "passports" with photographs and information on all the libraries in the system. Patrons are encouraged to visit all of them, and if they do, they can collect stamps at each of the branches. Some of those who can show a fully stamped pass in January of 2009 may be eligible for a special gift!
Posted by Judith van Praag at 8:26 PM