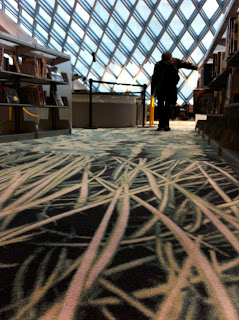 With your nose close to the floor you get a great scoop of the iron and nylon carpet with botanical theme that graces the 3rd Level Living Room and Level 10 Reading Room.

Posted by Judith van Praag at 2:29 PM No comments: 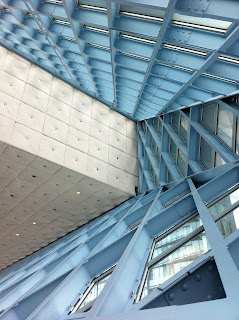 Yes, it's finished, China Central Television Headquarters by Ole Scheeren and Rem Koolhaas is a fact.

Check out Iwan Baan's photographs of the Design Exhibit at MOMA, where his giant photos form the backdrop to the architects presentation and his photos of the construction of CCTV.

Remembering the devastating fire in February 2009, the delivery of this humongous project is an even bigger feat.
Posted by Judith van Praag at 4:41 PM No comments:

LEAP at The Seattle Public Library stands for Library Equal Access Program. LEAP allows patrons who are hearing or vision impaired to have access to all items in the library's collection.


Access is double easy now that LEAP has relocated (a while back) from Level 3, to Level 1 (Fourth Avenue entrance), no more zigzagging to get where you want to be.

Make a B-line from the front door to LEAP.


Still, here are some zigzagging pointers, so you know what to expect.
You'll find yourself on top of Public Art, conceptual artist Ann Hamilton's wooden floor, 7200 square feet of computer routed first sentences in eleven languages. This department is called LEW for Learning English as a Second Language and the World Collection.
As you continue your B-line to LEAP, you'll find the SirsiDynix Gallery which leads to the Children's Department. It has a polyurethane floor and a stainless steel wall.
Past the telephone bay the wall continues and you'll find

Every fourth year we need a leap year to keep our Gregorian calendar in alignment with the Earth's revolutions around the sun, at the library LEAP is there for you every day!

A quick note in response to article by Nicolai Ouroussoff in the New York Times. Who's going to win the competition for Eli Broad's personal collection's home?
Just returned from visiting Los Angeles, I can't wait to go back to the vibrant, creative city of angels. Next week Mr. Broad may make his decision about what's to be added to the area that already for a while has not much to do with the downtown of my first acquaintance in the mid-seventies.
Posted by Judith van Praag at 7:34 AM No comments:

There's 101 years difference in age between OMA and Leigh & Orange Architects; the former founded in London in 1975, the latter in Hong Kong in 1874. Last year Leigh & Orange celebrated its 135th anniversary, check out the history of the firm on the L&O website, images of projects dating back to 1901 up to and beyond 2008 give a good idea of the firm's versatility.
OMA & L&O won the contest to design the Chu Hai College campus in Hong Kong, see the OMA-site for more information.
Posted by Judith van Praag at 11:51 AM 1 comment:

OMA at Home in Rotterdam

The Kunsthal, the Cube of Cheese, the Triplet Towers, ever so slowly but steadily Rem Koolhaas has been putting his mark on his home-town. And now OMA, in partnership with ABT Engineers & Co and Werner Sobek is to build the multi-functional StadsKantoor or city-hall & center of Rotterdam.

According to Architectenweb the ANP announced that the People's choice had not been OMA's design but that of SeArch. But Contest Committee members apparently didn't like the prominent "green cones" (I think they resemble cocktail shakers) in that firm's design.

A soundless video on YouTube shows imagery related to the StadsKantoor (City Hall) design, and for a split second the viewer can also detect the three towers OMA is building in the harbor city of Rotterdam.

Does the structure of StadsKantoor remind me of Lego®?
Yes, it does, a Lego® Transformer. Look at those awesome legs that from a certain angle seem to support the whole floating body!

Promised to be the most sustainable building in the Netherlands the complex will catch rainwater, have elevated terraces and homes with gardens, and facades with sandwich panels and lightweight thermal insulators (nanogels).
Posted by Judith van Praag at 3:31 PM No comments: 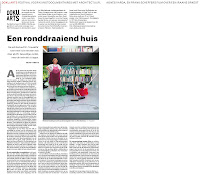 Image of the article by Tracy Metz, is from newspaper NRC, photographic image is from the docudrama Houselife.

Guadalupe Acerdo is the cleaning lady of the "Maison a Bordeaux", the "best design of 1998" according to Time magazine.
She's prominently featured in "Houselife", a film by Ila Bêka and Louise Lemoine.
Acerdo holds her ground in the lift, or on the "movable floor" in the house designed by Rem Koolhaas.

Houselife may be viewed during DOKU.ARTS the Festival of Films on Art
June 11-14, 2009
At the Filmmuseum
Vondelpark 3, Amsterdam

It pays off to buy more than one ticket at the time!

Ticket reservations:
tel. +31(0)20-5891400
Please pick up reserved tickets at least 30 minutes before the start of the screening.
Posted by Judith van Praag at 2:04 PM No comments: