Realdania at Bryghusgrunden in Copenhagen 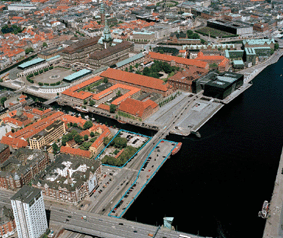 Judging committee of Realdania unanimously has chosen OMA to design buildings and public space on the location of the old Brewery site in the neighborhood called Bryghusgrunden.

Rem Koolhaas and Ellen van Loon will head the design team, while Chris van Duijn has been appointed to head the project team.

Within an area covering 12.000 square meters, the architects need to envision Realdania's new headquarters, gallery space for the Danish Architecture Centre, housing, offices and recreation areas. All this interspersed with public space, to create a lively ambiance. Projected opening date is in 2010.

Realdania is a strategic foundation created with the objective of initiating and supporting projects that improve the man made environment. The foundation's mission is to enhance quality of life in Denmark, by means of quality design and building.
Realdania was established in late 2000 following a merger between two large financial institutions. At the end of 2005 RealdaniaÂ’s net capital amounted to approx. 3,9 billion Euro. In 2005 the foundation's grants amounted to approximately 120 million Euro. Realdania is currently involved in approx. 45 strategic flagship projects and approx. 210 focus projects.
Posted by Judith van Praag at 8:07 AM

Realdania and Rem Koolhaas about to lose the battle on the Brewery Site in the very center of the old part og Copenhagen Denmark.

An alternative vision for this spectacular area in Copenhagen has been presented. The Copenhageners, experts on city planning, historical sites and other agree that the Realdania mega-office building will, if realized, eventually destroy the most magificent site in Copenhagen.

A powerful civil society group is agitating against the project and seems to be successful in mobilizing support for an alternative development.

Here is a summery of the confrontation:


One of Copenhagen’s unique historic cultural environments, the Brewery Site, is at serious risk of being severely compromised and irreversibly damaged by Realdania’s office building project.


The Friends of the Brewery Site - a protest and a vision

In short, the Friends of the Brewery Site is strongly advocating against Realdania’s office building project at the Brewery Site due to the site’s location at the historical and cultural centre of the old part of Copenhagen as well as due to the fact that the site is offering a unique opportunity for creating and developing Copenhagen’s most attractive outdoor recreational and cultural space at the historical canal and harbour environments.
From the very day that Realdania acquired the Brewery Site, Copenhageners have protested against Realdania’s project. The protest is not against Realdania or its architect, Mr. Rem Koolhaas, as such but a strong and qualified protest against building on the very last harbour spot at the very centre of the old city. The story and the protest against Realdania have been described and analysed in all major Danish and local newspapers, as well as in the national public radio and television. More than one hundred articles about the Brewery Site have been published.

The Friends of the Brewery Site, a community group in the centre of Copenhagen, have coordinated the protest.

Apart from a symbolic though important sign-in campaign against Realdania’s project and in favour of a unique recreational and cultural outdoor space at the canal and the harbour emphasising the uniqueness of the historic and idyllic neighbourhood, the Friends of the Brewery Site has formulated an unified plan, a vision for the Brewery Site. The unified plan has been introduced to the public at an official launching and at several public meetings concerning the site. Politicians and NGOs have in public and in private forums pronounced themselves in critical terms against Realdania’s project and in favour of the vision of the Friends of the Brewery Site.


Brief overview on the Brewery Site and its unique surroundings
The Brewery Site (Bryghusgrunden) is placed on a tiny artificial island, Frederiksholm. The island was filled in towards the historical harbour fairways in the mid 1600s after the King’s unfortunate experience with the Swedes having stormed Copenhagen in 1659 after several years siege. At that time, the Brewery Site constituted an extension of the old city which actual founding is normally considered to have occurred in 1167. The site’s name originates from the Royal Brewery, which occupied the area from 1767-1960. Today, it is located at the far Southeastern corner of the centre of the former Copenhagen fortified city.

On the other site of the Canal, the Brewery Site is facing some of Copenhagen’s oldest and most impressive buildings, King Christian the IVth Brewery (since 1767 functioning as a warehouse) from 1619 build on a corner bastion from 1607 and the Royal Arsenal Museum, also build by King Christian the IVth, from 1598.

Along the canal and the old maritime environment, 24 houses are protected and preserved all from the 1700s and the others are officially declared worth preserving. Buildings include several mansions from the first half of the 18th century, including today’s National Museum, the castle’s riding complex from 1730s, the Hestgarde Barracks from 1792, the Civil Service Material Yard from 1771, and the current buildings of the Fortification Material Yard from between 1680s to 1768. Several of today’s bridges go back to the first half of the 1700s. Thus, the neighbourhood along and around the canal is one of the most unique and consecutive cultural environments in the old parts of Copenhagen. Historians have declared the Brewery Site and its surroundings as the very centre of Copenhagen’s cultural history.

In sum, the entire Brewery neighbourhood is one of great urban and building development value - historically, culturally and architecturally. It is where the city of Copenhagen was founded during the first two centuries of the second millennium and where it developed in the 1600s. It has been at the heart of the Kingdom of Denmark for almost 800 years as well as where generations of government administration and knowledge has been concentrated until today. As a result, some of Denmark’s foremost architects have designed the buildings over the course of the city’s history.


Realdania – the current owner of the Brewery Site
Realdania bought the Brewery Site in October 2005 on a conditioned contract. Realdania is a Danish investment company and at the same time the richest Danish foundation within the built environment. At the end of 2005, its net capital amounted to 3,9 billion Euros.

Its mission is twofold: 1) to improve the common good through the built environment, and 2) developing its capital. In Denmark, the foundation is mainly known as a supporter of restoring and developing the Danish fixed cultural heritage. However, on the Brewery Site, the foundation wishes to construct a 17.000 square metres building mainly for offices (50 pct.), luxury apartments (25 pct.), and an exhibition facility for the Danish Architectural Centre at street level. Realdania plans to move its own Headquarters to the new office building.

Realdania is known as the altruistic trust fund assisting Danish local authorities as well as ministries and others in realizing projects on ground of public good or common good. The Brewery Site case is different, as Realdania for the first time has decided to build a huge domicile to itself on probably Denmark’s and certainly Copenhagen’s most valuable cultural and historic site. Realdania postulates that its domicile exactly is what Copenhagen needs at the site at the canal and the harbour.

Realdania acquired the Brewery Site well knowing the special and legal reservations and limitations tied to the area. Nonetheless, Realdania bought the site with the sole purpose of building for private purposes, including its own new Headquarters. This is highly criticisable taking into account Realdania’s missionary statement and its overall objective of contributing to enhancing the quality of life, inter alia, in urban and historical sensitive environments.

By consequence, politicians in Copenhagen will have to turn the democratically approved communal plans, which go against the Realdania project, upside down if they are to approve the Realdania project. Whether or not it will happen, eventually, is still very uncertain.

Copenhageners are continuously striving towards convincing Realdania and in particular the majority of politicians to disapprove the Realdania project and instead developing Copenhagen’s new and attractive public and cultural space at the canal and harbour fronts.
Instead, Realdania and Mr. Rem Koolhaas should instead contribute to the development of virgin land at the Copenhagen port entrance, named Refshaleøen. Here, Realdania could set a standard for developing this very unique area just a few kilometers from the Brewery Site.